In Praise of Procrastination – Guest Post by Malcolm Greenhill 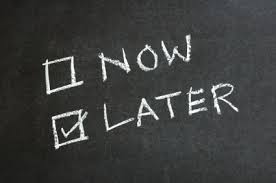 In his memoir Confessions, Saint Augustine tells us that he used to pray “Lord, make me chaste – but not yet.” Augustine’s prayer not only became the world’s greatest pick-up line, but also illustrated a plight so common, that it explained why most of the world’s great religions were against procrastination, seeing it as a clear detour from the path of salvation and enlightenment. Much later, the Industrial Revolution brought about a fusion of Christian moralism and commercial self-interest, so that procrastination was seen as forestalling not only salvation in the next life, but also financial well-being in this one. It was Benjamin Franklin who was credited with saying, “Never put off till tomorrow what you can do today.” With a few notable exceptions, such as Mark Twain (“Never put off until tomorrow what you can do the day after tomorrow”), procrastination has usually had negative connotations.

This is strange because in both ancient Egypt and Rome procrastination was thought to be a positive virtue. The Latin verb procrastinate, combines the common adverb “pro” implying forward motion with “crastinus”, meaning belonging to tomorrow. The Roman use of the term seems to reflect the notion that deferring judgment may be the wisest course.  Indeed, the Romans revered someone who continually resisted and delayed intervention. His name was Fabius Maximus, nicknamed the “cunctator” (the procrastinator). Flavius drove Hannibal, who had obvious military superiority, crazy, by harassing him while avoiding or delaying engagement. After Flavius’s military successes in the Punic Wars the name “cunctator” became an honorific title.

Reflect on the fact that while the world is increasingly demanding speed and immediacy, nature takes her own good time (we haven’t yet found a way to speed the process from seed to fruit). Possibly procrastination is our natural defense against the speed of modernity, a way to let things take care of themselves as they so often do if we refrain from interfering. Judges know that sooner or later parties to a dispute will usually agree on a settlement without the intervention of the court, and that is why they are always postponing cases. However, there is a natural bias towards intervention which needs to be resisted. Professionals and advisors find it much easier to sell action rather than inaction.  Doctors get paid more for surgery than they do for waiting for the body to heal itself, and corporate managers get paid more for making profits than they do for preventing losses. Finally and counter-intuitively, action is easier than inaction, as it’s easier to act from pent-up emotions than do nothing as a result of reasoning.

Malcolm Greenhill, is the President of Sterling Futures, a fee-based financial advisory firm in San Francisco, California, working with individuals and small businesses in multiple states.

He writes about wealth related issues in the broadest sense of the word. The origin of the word “wealth” is the old English word “wela” meaning welfare or well-being. As recently as a century ago the word was generally understood to mean a person’s all round well-being, including health, family, work and spiritual life.